Local business, Callaghans Estate Agents, have sponsored the campaign with owner Sean Callaghan saying, “it is really important to listen to the children’s concerns, illegal parking is an issue around the school area and we’re very happy to be involved with this initiative.”

The pupils, aged between 7 and 11 years old, each designed a poster depicting the problem with illegal parking outside their school between morning drop-off and afternoon pick-up. The  Staff were so impressed by the pupil’s work that they agreed to work with them to develop a road safety campaign.

Associate Headteacher, Vanessa McManus said, “We’re incredibly proud of all of our pupils, they have shown real determination in developing this campaign. The drop-off points are a continuing problem and we hope this will signal a new appreciation for pupil safety.”

The plucky group of youngsters have already had some success with road safety, after meeting with Councillor Iain Roberts to discuss a dangerous junction near the School; he has since put forward a proposal to have yellow safety signs installed. Mr Roberts, said, “ the children have put a lot of effort into this campaign, we’re delighted there is community support through Callaghans, local Police and GVP. As always I will continue to work with the Gatley Primary on these issues.” 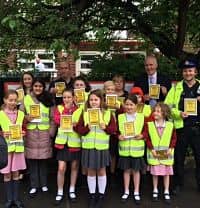 Below are just a few reasons how we can help you sell or let your property:

For more information see our services page or call us on 01225 303500 and one of our friendly members of staff will be happy to help.